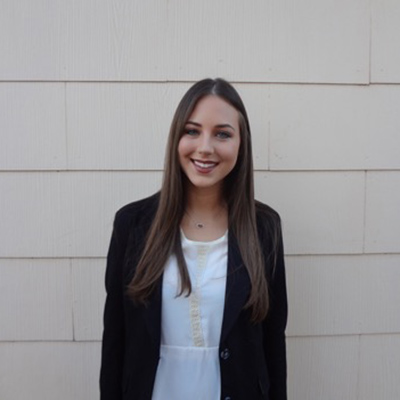 Taryn Valentine spent two days in Englewood, Kansas, filming and interviewing people who had lost their homes to one of the worst wildfires to hit the state.

The fire destroyed 11 houses; fortunately, no residents were injured. Creating this feature story was one of Valentine's favorite class projects.

“You never know what you’re going to see when you’re filming,” Valentine said. “It was really good experience.”

Since she took an introduction to film and television class her freshman year, Valentine has had a passion for film production. While focusing on screen studies, she realized she was more interested in the technical side, which involved holding a camera versus only studying the film.

“I just love movies more than anything else because it’s a cool way to view things,” Valentine said.

Valentine is a videographer for the Oklahoma State University Department of Wellness where she films group fitness classes, intramurals and wellness events. She also creates informational and promotional videos for the Department of Wellness website and social media accounts. In addition to her job, she has made promotional videos for a national Panhellenic sorority and recently filmed her first wedding.

“It was a positive learning experience,” Valentine said. “I’m excited to tap into the wedding business.”

Beginning her first college semester as a completely different major, Valentine realized early on she needed to enjoy what she was learning to put in the required effort. Although it took her a semester of going through classes she did not find interesting, she said it was worth it knowing it led her toward a degree she is passionate about.

After graduation, Valentine wants to work as a videographer in any capacity to work toward her dream career in film.