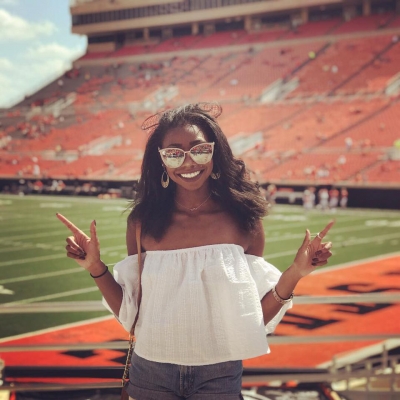 Dee Fuller said she believes the coursework offered is challenging but will ultimately set School of Media & Strategic Communications students up for success.

“SMSC helps students live up to their potential,” Fuller said.

Fuller was an agricultural communications major but realized she wasn’t passionate about it. She was also a member of the Oklahoma State University’s cheerleading squad her first two years. At the end of her sophomore year, Fuller decided to take a semester off from school and a year off from extracurricular activities. She used this time to figure out what major was right for her and refocus on her school work.

She became a ctrategic communications major when she returned. Although Fuller loved learning about public relations, she also had a passion for sports. She decided to pursue sports media to merge two of her interests.

“When I came back, I wanted to enjoy what I was doing and do something I was good at,” Fuller said.

She is a member of the Association of Women in Communications and plans to join a sorority next semester.

Fuller has big plans for her post-graduation career; she received a job offer at a friend’s PR firm. She is thankful for the offer but would rather get experience writing in the sports PR field for a Texas college. Eventually, she would like to open a firm and expand abroad.

“I want to dip my feet into every aspect of PR,” Fuller said. “Whether it be sports PR or regular public relations, I want to be versatile.”

Fuller said she believes SMSC students have to be good at communicating online and in person. She said she feels the coursework offered is challenging but will ultimately set SMSC students up for success. Graphic design was one of her favorite classes because it brought out a creative side she didn’t know she had.

“My biggest learning experience is to go into everything super positive,” Fuller said. “Face everything head on.”

“In this major, employers are looking for experience,” Fuller said. “At least join a club so you can have something on your resume.”

Fuller was so nervous the night before her Language Proficiency Exam she burst into tears. She got four questions wrong, which gave her the assurance that SMSC was the perfect place for her.