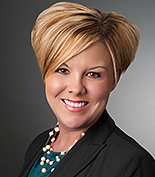 It was in her Media Law class with Professor Joey Senat that King realized instead of communications, she would rather have a profession in law.

After graduating from Oklahoma State, she made her way to Texas Tech to attend law school. King said Senat helped solidify her interest in law.

“Most of my fondest memories in the Paul Miller Building are when I was in Professor Senat’s class,” King said.

Once King graduated from law school, she found herself in Austin working as an in-­house attorney for Lake Travis. There, she provides day-­to-day legal advice and counsel to the upper administration for the school district, as well as the board of trustees. She  handles any legal issues that come up with the school district.

King said her degree from OSU has benefited her the most in that it helped her develop a strong ability for reading and writing.

“People don’t really realize this until, or unless, you’ve gone to law school or start practicing as a lawyer,'' King said. "It's a profession that is very heavy on reading, analyzing and, in particular, writing. So becoming a really strong writer through the journalism classes and public relations classes helped me excel at that part of the job as a lawyer.”

Although King never had an internship in her undergraduate classes, her advice for students is they should take advantage of that opportunity. She said students should look for jobs or internships specific to the area they want to go into. King said classes do not give the opportunity for experience to figure out if the job is something students would want to do.

“Oftentimes, jobs and careers are a lot different than we think they are in school,” King said. “A lot of time, school, whether that be undergrad, or in my case, law school, really doesn’t prepare you for what real life, on-the-job training and work is.”

King said she wishes she would have known that it only gets harder after college. She wants students to enjoy college while they can.

King urged students to take advantage of college but to also have fun while doing it because things are never the same after graduation.