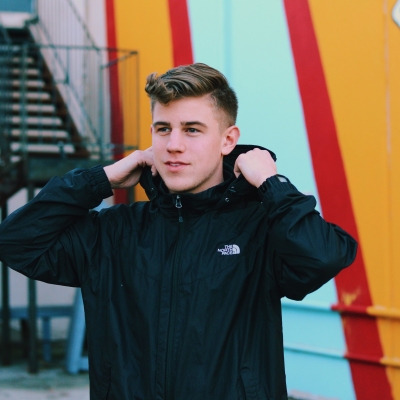 Originally from Norman, Oklahoma, Levi Bernhardt’s experiences at Oklahoma State University have inspired him to chase his dreams, no matter where they take him.

When selecting a major, Levi Bernhardt wanted anything that could help him avoid the average desk job.

Bernhardt chose to pursue a degree in multimedia journalism. Multimedia production allows him to work creatively every day in this classroom setting.

After graduation, Bernhardt has many ideas for his career plans. Bernhardt is planning to move to Seoul, South Korea, immediately after graduation to teach young students English. After about a year, he plans to move back to the U.S. and pursue a career either acting professionally, hosting an entertainment news show, acting as an on-screen talent for an online content creation website or making YouTube videos professionally. With a wide span of interests, Bernhardt looks forward to working with the skills and knowledge he has gained throughout his college years.

As for learning experiences, Bernhardt has been given many opportunities through Oklahoma State and the School of Media & Strategic Communications that have helped shape his interests and allow him to practice what he has learned inside the classroom. Bernhardt was given the opportunity to anchor the Miss OSU Pageant as his first live TV broadcast.

“I was really nervous but in a good way,” Bernhardt said. “I felt confident in myself and nervous since it was new and exciting.”

Although wanting to improve his interviewing skills, Bernhardt found it helpful to see himself live on television and constantly learning from real-world experiences.

SMSC challenges students in different ways, and the expectation of deadlines challenged Bernhardt. Because SMSC classes and curriculum are based on deadlines, he has been held accountable. In addition to time management, he has been challenged to constantly create content.

“SMSC has challenged me to find new things because it forces me to create things even when I feel like there is nothing to make,” he said. “My classes require me to find something, and it is nice to be able to flex my creative muscles so often in school.”