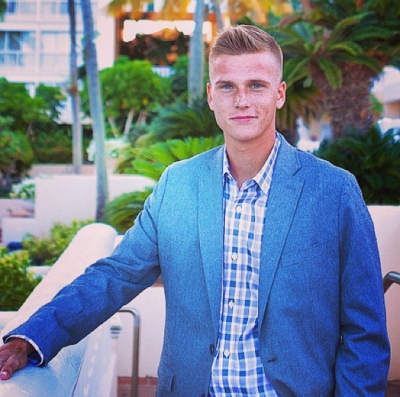 Ford is from Tulsa and is a member of the Delta Tau Delta chapter at Oklahoma State University. Before joining the School of Media & Strategic Communications, Ford was a certified production assistant. He chose SMSC to further develop his digital production skills.

After graduation, Ford doesn’t have any specific career plans. He said he hopes to make sound effects for animated movies on the big screen. He even would like to be a voice-over actor as well.

While in SMSC, Ford has been able to learn skills. His electronic communications course taught him how to operate a camera and use internal and external microphones. He has also learned how to conduct interviews and interact with other media professionals. His biggest learning experience so far is writing in AP style.

“I basically had to unlearn a lot of the writing I had been taught up to that point,” Ford said. “[Associated Press] writing is a lot harder than the writing you were taught in high school.”

Feeling  comfortable working on a computer is Ford’s advice for incoming students. SMSC students learn to use several computer programs and software to edit videos and photos.

“Be prepared to spend a lot of time working on computers,” Ford said. “Video and sound editing can be tedious and take a really long time.”

While at OSU, Ford has been able to gain some experience in video production. He was center field camera man for the student production team which films the OSU softball games. This summer, Ford saidhe hopes to get an internship at Steelhouse Productions in Tulsa, which is a creative studio of storytellers and visual artists.