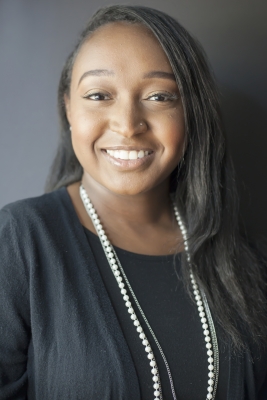 Chrishayla Smith made it a point to get involved her freshman year and has continued to serve and lead since.

In her four years at Oklahoma State University, Smith has been president of the National Association of Black Journalists, an intern with Edmon Low Library and served as a School of Media & Strategic Communications  ambassador. She has also a member of the Advertising Club and holds a position within the National Student Advertising Competition team.

“Each organization has taught me something different,” Smith said. “But one thing they all taught me was the importance of teamwork and communication.”

“I did not understand the influence I would have on prospective students,” she said. “I realized sharing my hardships helped others who might have gone through the same thing.”

Last summer, Smith attended the NABJ annual convention in New Orleans. At the conference, she discovered how important networking was. Smith encourages her peers to foster those relationships as much as possible.

Smith has learned so much from others and hopes to give back just as much.

“My goal is to own a nonprofit organization that offers programs responsible for uplifting black women,” Smith said.

Her willingness to motivate others in being the best they can is why she chose to work in advertising.

“The feeling of seeing something small turn into something huge excites me,” Smith said. “That is why I want to help build brands and protect their reputation.”

After graduation, Smith plans to move out of Oklahoma. After studying abroad, she is open to international job opportunities.

“I would love to work for an international brand that allows me to handle the digital media and marketing in the fashion, entertainment or beauty industry,” Smith said.

With the help of SMSC, Smith has gained real-world experience, long-term connections and unforeseen opportunities.

“Do not let self-doubt stop you from sharing your craft with the world,” Smith said.