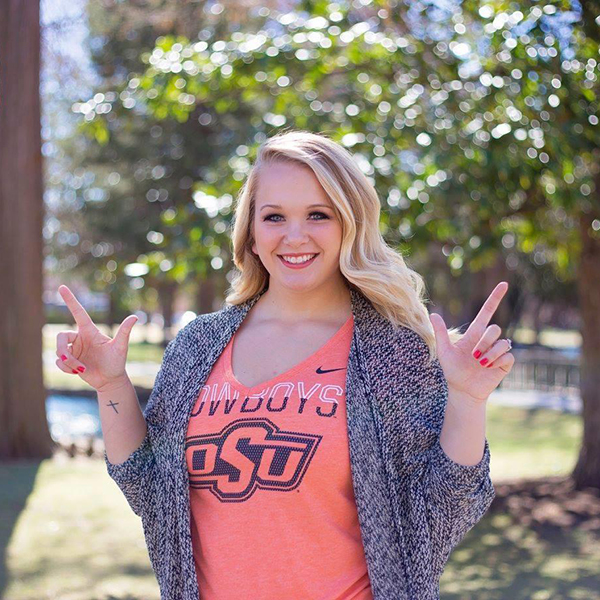 Amanda Hamlett’s story is a prime example of how opportunities can arise when least expected.

While Hamlett was in school, she gained experience by working behind a camera for the OSU football team. She filmed its study videos, which consists of filming practice so the team can watch the films during meetings. She continued this job for three years.  She then went on to work with OStateTV in the communications office as a production coordinator for livestreams and home game kickoff shows.

After graduating, she was applying for many jobs and landed a position with NBC Sports in Connecticut. Hamlett and her fiancé packed up and moved from Oklahoma on a whim. She was looking forward to a full-time position and to be with the company for a long time.

“There was some miscommunication and it only ended up being a three-month position,” Hamlett said.

Hamlett had signed a one-year lease and was stuck in Connecticut without a job. To keep money coming in, she picked up bartending. One slow night at the bar, small talk began between Hamlett and a customer. She found out that he is the vice president of talent and production development at CBS Sports Network and needed to fill a position as soon as possible.

“I almost had a heart attack,” Hamlett said. “I told him my story and what my degree was in. He gave me his card and I sent him my resume. I got an interview on Monday and by Tuesday I had the job as a talent coordinator at CBS Sports in New York City.”

Through this unexpected experience, Hamlett is able to give advice to graduating seniors.

“Don’t take anything for granted,” Hamlett said. “Also, don’t be picky when applying for jobs. Don’t be afraid to make that move and embrace it because you never know where it will take you.”