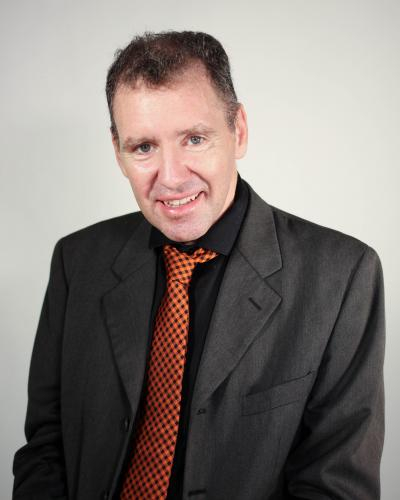 Dr. Daniel G. Shipka died on Monday, July 27, 2020 after a tragic battle with Multiple System Atrophy (MSA), a rare disease that aggressively attacks the nervous system. He was 53 years of age. A much beloved mentor, accomplished teacher and published writer, Danny, as he was known, passed away at his mother's home in Orlando, Florida.

Danny lived to teach and loved nothing more than being part of his college community. His sudden passing at such a young age is deeply painful for his family, friends, colleagues and former students. His lively, witty and tenacious spirit made him a fighter despite the disabling impact of the disease. He bravely fought the demise of his voice and body, eventually forcing the loss of many things he loved like playing tennis, swimming, driving, singing, traveling, writing - but most of all, teaching.

Danny was born on the Southside of Chicago on June 15, 1967, to parents Dan and Marilyn Shipka. He loved going to drive-in movies as a child, which created a lifelong interest in cinema. Danny had a love for travel and adventure. He went to great effort to lead his college students on study abroad trips to expose them to his favorite parts of the world, especially London and Paris.

Danny earned a Master of Science in International Studies at Oklahoma State University in 2001. An energetic and enthusiastic educator with a passion for teaching courses in communications, public relations and film, Danny taught at the University of Florida while attending graduate school, and earned his Ph.D. in 2007. He then joined the faculty at Louisiana State University, where he taught for six years and was a very popular assistant professor. He then returned to his alma mater, Oklahoma State University, where he earned tenure in the School of Media and Strategic Communications, and only recently resigned his position. Danny loved teaching and enjoyed engaging students in controversial and heated discussions to expand their communication skills. He believed in the importance of two-way symbiotic professional public relations communication and led his students to work on dozens of not-for-profit and charity cases globally. He devoted tremendous time to mentoring and advising his students, and he served as the graduate advisor to manymasters and doctoral candidates. Although much of his teaching focused on strategic communication and public relations, he had a lifelong interest in the European exploitation film genre. He was the author of a highly valued film analysis book "Perverse Titillation: The Exploitation of Films of Italy, France and Spain" which sold to both academic and commercial audiences. He also co-edited "International Horror Film Directors: Global Fear" with co-author Ralph Belliveau. He was also author and co-author of dozens of academic journal articles and papers.

He served actively on several campus committees and enjoyed being engaged with colleagues in a variety of leadership roles. Danny lived to collaborate and gave tireless hours to the academic community. He served on the professional committees of the Southwestern Education Council for Journalism and Mass Communications and other professional organizations, always eager to contribute to growth and change in his field.

Danny was the recipient of several awards, grants, fellowships and acknowledgments. His course ratings were very high and he impacted hundreds of young people inspiring them to become communication professionals. Having to retire at an early age was a heart breaking reality for Danny when MSA made it impossible for him to continue lecturing. He was actively seeking treatment at the University of Florida Center for Neurology Research at the time of his death. His body has been donated for scientific study to further understand the rare disease that robbed him of his life.

Due to Covid 19, a memorial service will not be scheduled at this time. Danny's family and friends have created a fund that will be used to establish a scholarship at Oklahoma State University's School for Media and Strategic Communications. Donations may be made at the following link https://philanthropete.osugiving.com/project/21739. Please specify that your contribution is in memoryof Danny Shipka.